The event was well attended by Judges, counsel, clients and colleagues as our guests. This is a testament to the heritage and lasting legacy of our firm in South Africa.

Marius van Staden, the firm’s chairman, delivered an introductory address and welcomed the guests. This was followed by the keynote speech delivered by Adv John Mullins SC, of the Pretoria Society of Advocates (and who himself was once a partner at the firm). What follows is a short history of the firm, paraphrased from his address.

In 1930, Joe Daniel (“Jippie”) Page joined the firm, which then became known as Savage & Page. Oscar Galgut, an erstwhile Judge in this division (and who later served at the Appellate Division) said of Page that “[h]is great virtue, given perhaps to few in the legal profession, was that he saw the weaknesses in his client’s case almost immediately, and would advise the client fearlessly of those weaknesses, in order to stop the litigation, and get the best result possible.”

The foregoing was the first generation of lawyers that generated what would become a legacy. When Piet Jooste joined the firm in 1945, the world was emerging from the ashes both of the Great Depression and the Second World War, and the firm became known as Savage, Page & Jooste. His joining the firm ushered in the second generation, and he was the person who originally built the firm’s insurance practice for which we are renowned to this day. Sadly, however, he was destined to die young, in 1965. It was during this time that the firm moved into the Standard Bank building in Church Square.

In 1950, when Gerald Savage was the chairman of the South African Permanent Building Society, the firm moved into the Society’s headquarters on the corner of Pretorius and Church Streets in Pretoria Central.

In 1952, Neville Adams joined the firm. He was the son of one of the two brothers who founded another of Pretoria’s prominent law firms, and he introduced an intellectual property practice into the firm. Thus, the firm became what it is known as today.

The third generation of lawyers included Pat Addison, a prominent soldier during World War Two and an impressive attorney, and John Viviers, who was in attendance at the function. John Viviers joined the firm in 1948, at the age of 17. He completed his articles while studying and continued to grow the firm’s insurance practice. This included establishing a practice specialising in Legal Practitioners’ professional negligence, something the firm is renowned for today. In the tradition of maintaining legal excellence, Viviers lauded the values of good service, punctuality, integrity and courtesy.

In 1978, the firm incorporated and obtained its present and final iteration, Savage Jooste & Adams Inc and in 1979 the firm amalgamated with Roseman & Heunis.

The fourth generation of attorneys at the firm included Bill Prinsloo, who later became a senior counsel and a prominent judge in our division, Wynne Edwards, now a solicitor in the United Kingdom, and Brian Currin, who was instrumental in establishing the Truth and Reconciliation Commission.

The fifth generation included Mike Leinberger, who has since passed away, Hennie Aucamp, Pieter Viljoen (who remains at the firm), George Avvakoumides (a member of the Pretoria Bar) and of course John Mullins himself. These were the (then) attorneys who passed the torch to the present, sixth generation. 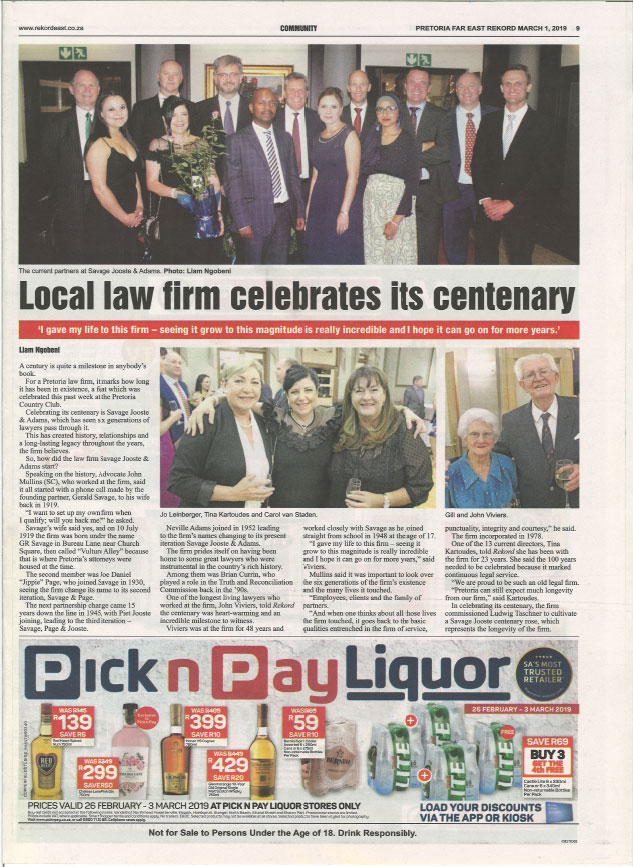 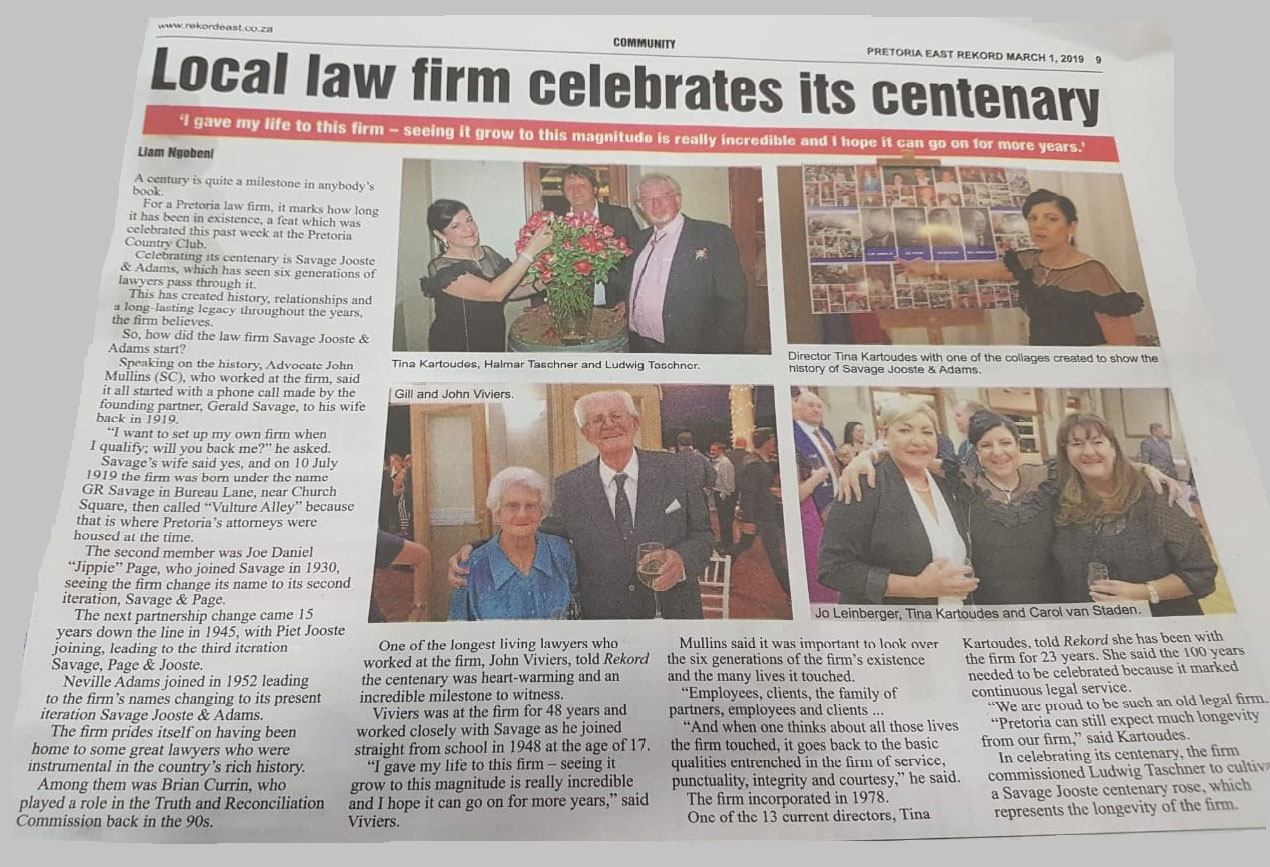